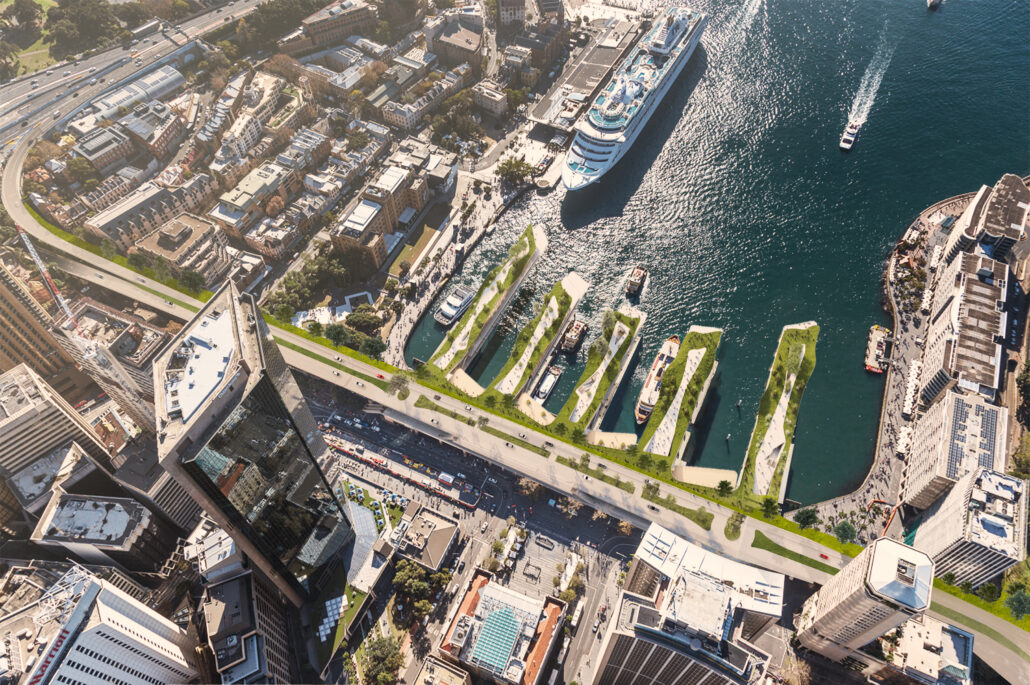 Imagine a Quay where you can buy fresh produce from a farmer’s market for lunch as part of your morning commute to work, or ingredients for your family dinner before you board the ferry home. Imagine having a croissant and coffee lunch on a grassy rooftop, surrounded by plants used for traditional bush medicine with an unmatched view of the harbour. Imagine meeting a friend for a drink in a place where you can lay amongst the native gardens as the sun sets behind the Harbour Bridge, uninterrupted by the hustle-bustle of the CBD right behind you. Imagine stepping off a train into an expansive green sanctuary for a picnic with the family, right in the heart of Sydney. Imagine a space where the people who use it are the priority, a space designed to create a seamlessly accessible experience, and an emphasis on making the Quay a people place, a destination in its own right – a truly Sydney Quay. 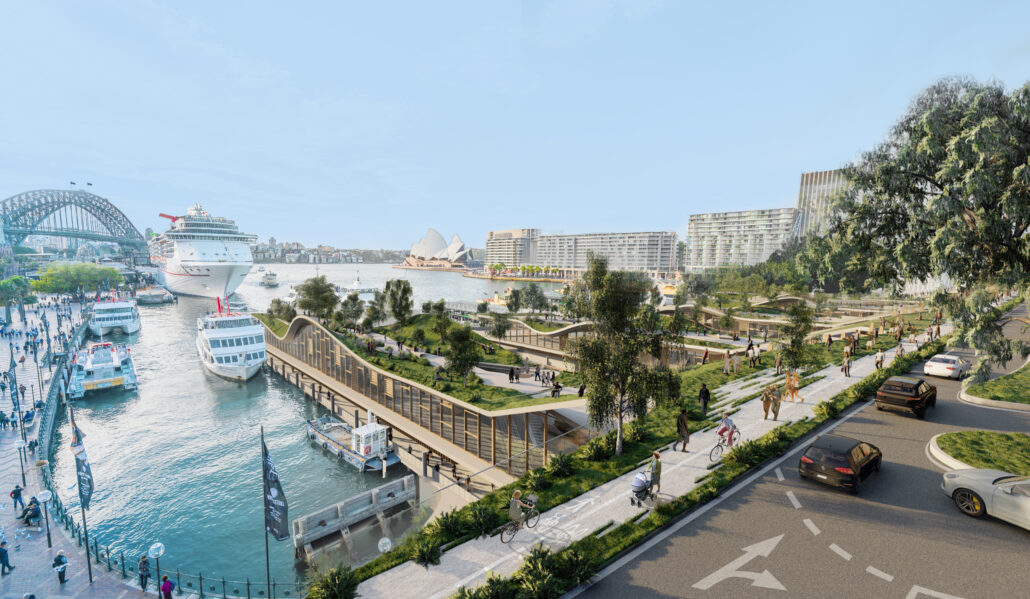 Public spaces need to adapt and become more resilient to changes in climate, community, and purpose. Envisioning a renewed destination that returns the public space to a human scale, Sydney Quay is a proposed solution to the currently overcrowded and disjointed Quay which feels like a place of transition rather than a destination. The proposal prioritises pedestrians through a design focused on green, warm, and ultimately shared community-based spaces and facilities while making the most of upgraded existing infrastructure locations and services of the Quay. This proposal is not an attempt to introduce another architectural icon to the city, but rather to create a destination that facilitates bustling activity without overcrowding; a transport hub that isn’t grimly industrial; a green space full of sunlight with genuine connection to the CBD, an amphitheatre to both the harbour and the city skyline. The multilevel redevelopment of the existing wharves serves to break down the spatial barriers and physical disconnect between the existing wharves, harbour and the city, instead adopting a principle of uninterrupted spatial connections between the iconic harbour, plazas, streets, station, and Cahill Expressway. The design ultimately preserves the importance of Circular Quay as an infrastructural hub of public transport while providing more open and accessible trains, buses, light rail, and ferries without sacrificing its cultural significance and priceless harbour view. The proposal connects the Cahill expressway directly to the wharves providing safe and seamless access for all people.

While the organic leaf-shaped roof form of the renewed wharves provides a seamless connection to the harbour, it also draws a parallel reference to the iconic Australian eucalyptus leaf, traditionally used for its healing capacity due to its naturally occurring medicinal properties by many Aboriginal communities. Sydney Quay seeks to mend the intrusion of the wharves into the harbours edge by creating a symbiotic relationship between landscape, the harbour, and the built environment. In acknowledging the traditional ownership of the Sydney Cove area, known in traditional language as ‘Warrane’, to the Gadigal people of the Eora nation, we recognise Circular Quay has always been a place of cultural significance to both Aboriginal and non-Aboriginal people, a place of first contact between the Eora peoples and settling Europeans. The project directly acknowledges both pre- and post-colonial history and the ongoing healing necessary from this collision of cultures. 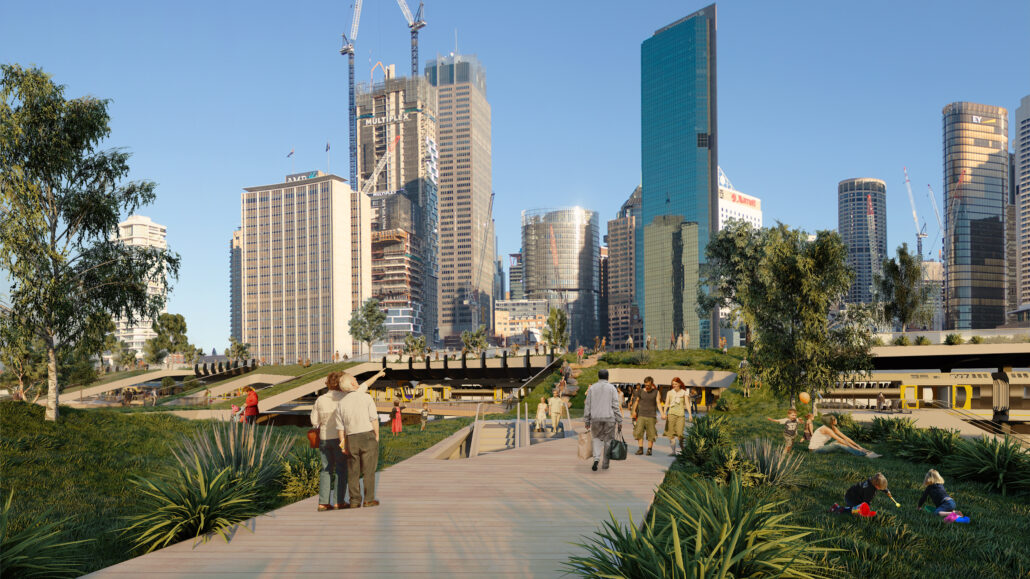 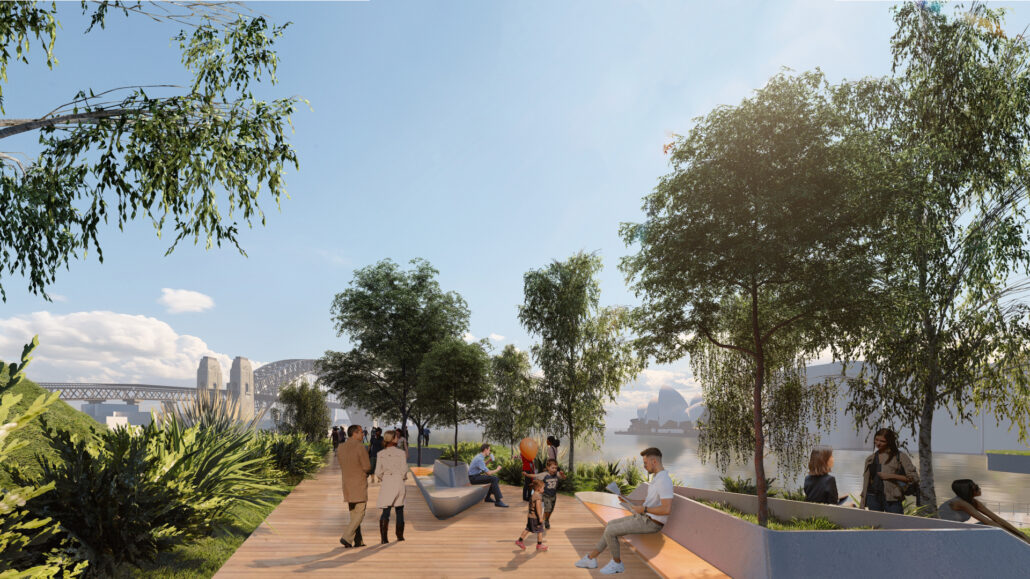 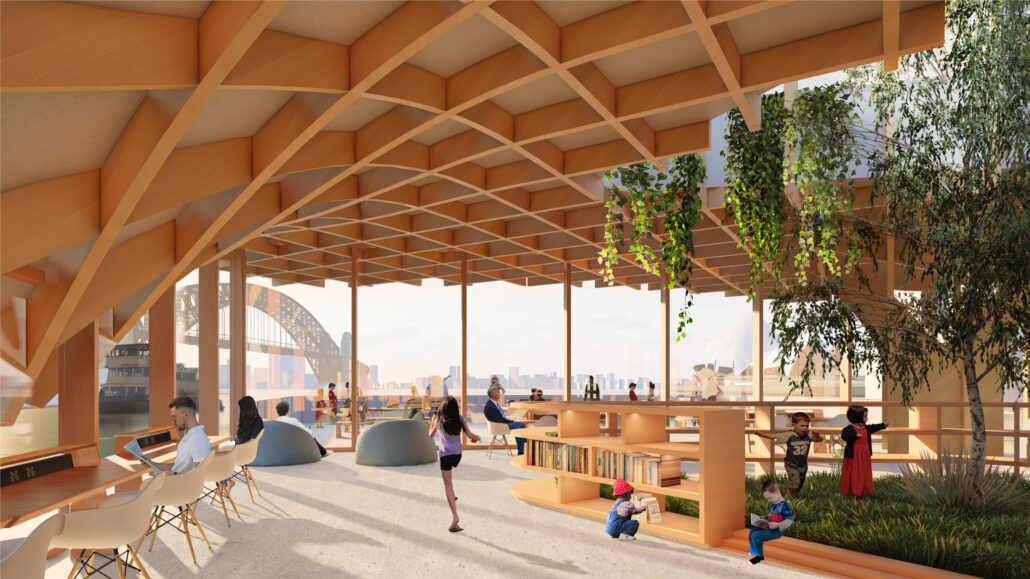 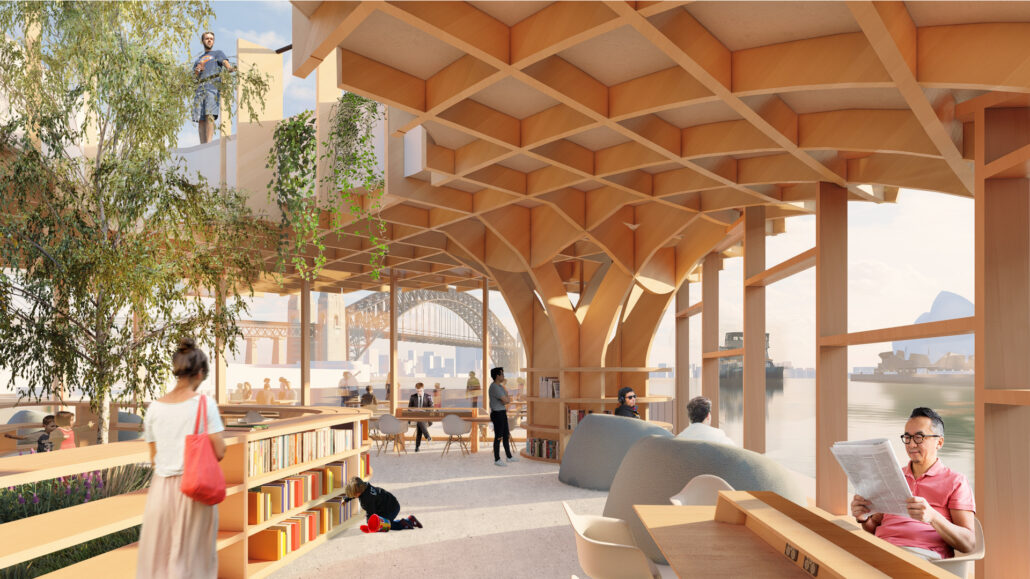 Designed to suit the existing structural composition of Circular Quay Station and Cahill Expressway, Sydney Quay is an urban renewal proposal that improves existing infrastructure to reduce the financial and environmental cost of the proposed development. Unlike some discussions around the future of the Quay, this scheme seeks to retain and exploit the existing concrete forms to their maximum potential, while still providing a human-centric plaza in which pedestrian interaction with the city thrives. By shifting the retail services of the area to within the multi-storey wharves, the space underneath Cahill Expressway becomes free to be reclaimed as a public space, providing a transparent transitional space between city and water and strengthening the essence of waterfront connection core to Sydney’s heart. As the success of Utzon’s Sydney Opera House relies in part to its public plaza, this project has the needs of the public at its core to create an active destination and healthy healing public place for locals, regional visitors, interstate tourists, and international tourists alike. 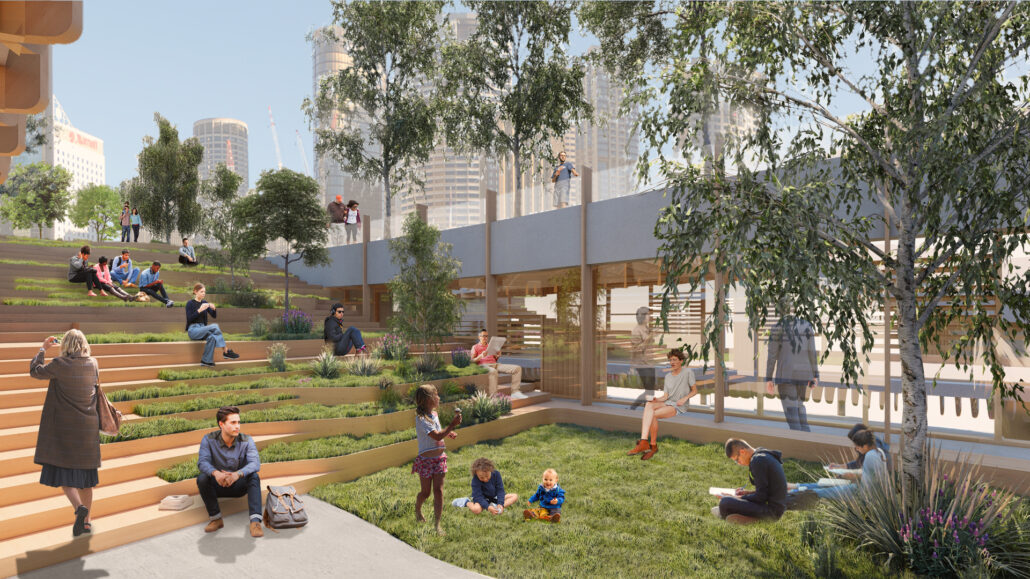 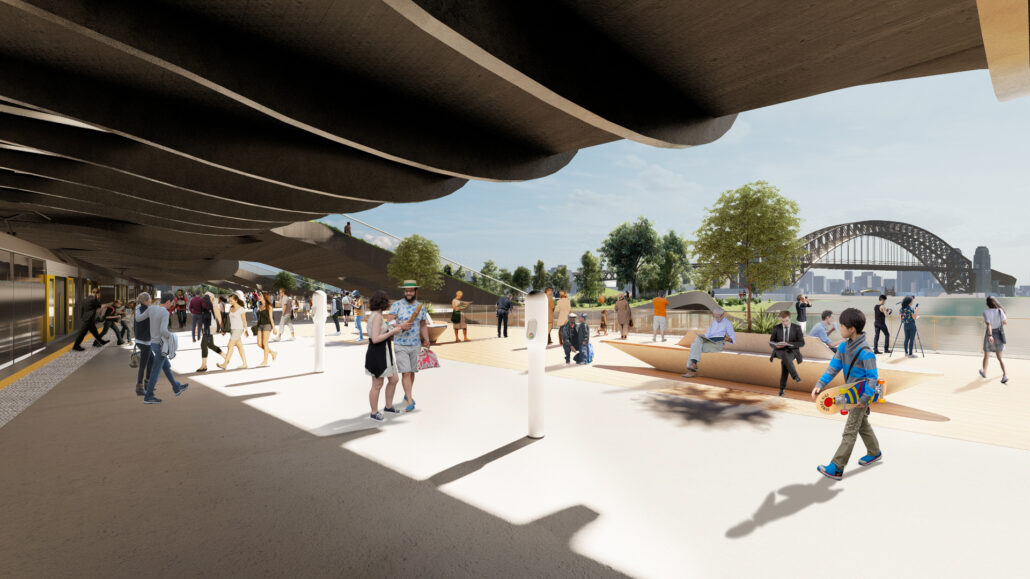 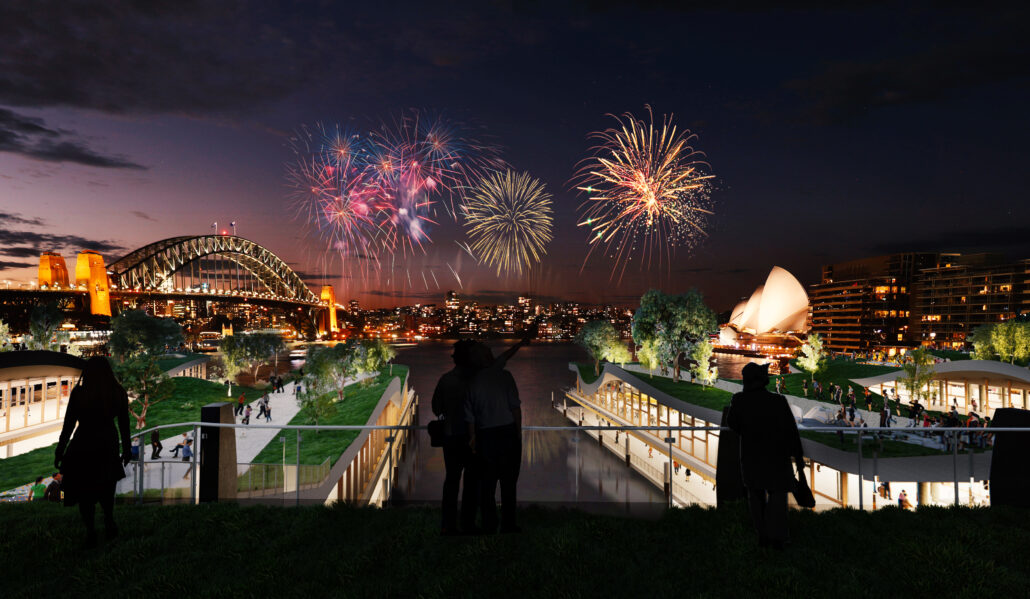